Ed Stafford, 38, was born in Peterborough and educated at Stoneygate School, Leicester; Uppingham in Rutland; and at Newcastle University. He then earned a position in the prestigious commissioning course at the Royal Military Academy Sandhurst, and was commissioned as a British Army Officer in July 1999.

Ed went on to command platoons in the Devonshire and Dorset Regiment, gaining his Northern Ireland medal in 2000 for his tour of Crossmaglen, South Armagh. Ed’s happiest military years were spent as an instructor at RTC Lichfield where he oversaw several hundred recruits through their basic training, before leaving the military as a captain in 2002.

Ed saw an opportunity to widen his experience when the United States invaded Afghanistan after 9/11. Ed took a position as a UN contractor advising UN electoral workers on planning, logistics and security matters during the first ever presidential elections. Ed managed a team of similar contractors from Herat, in the western region of Afghanistan. During his time there, Ed’s election counting centre was rocketed by terrorists; his airport camp was mortared by improvised explosive devices that narrowly missed his un-armoured office; and the compound he was stationed in was burned to the ground when the warlord Ishmael Kahn was removed from office.

Returning to expeditions, Ed took on a new challenge – setting up extreme cold weather expeditions in Patagonia, Argentina, for the expedition company GVI. Ed was Director of Programmes in Argentina, carrying out scientific research projects and Northern Ice Cap traverses in Chile.

Ed Stafford: Into the Unknown – in which he seeks the truth behind mysterious satellite images of Earth’s most remote locations.

One such site can be found in the desolate, rugged wilderness of Russia’s Siberia region. Here, among the silent forests and eternal cold lies a mysterious crater that has long defied efforts to categorize or label it; a place that was stumbled upon by accident and is the very definition of strange natural wonder.

whatever location we want on a whim, there is the conception that there are no new places to be found that lie beyond our all-seeing eye. However, this was not always the case. There was a time where exploration could uncover new natural wonders right over the next hill, and places remained out in the wild frontiers of the world that managed to elude not only detection, but explanation as well. In some cases, the answers to these mysteries have come no closer to being solved even as we have advanced to the age of satellite mapping. One such site can be found in the desolate, rugged wilderness of Russia’s Siberia region. Here, among the silent forests and eternal cold lies a mysterious crater that has long defied efforts to categorize or label it; a place that was stumbled upon by accident and is the very definition of strange natural wonder. 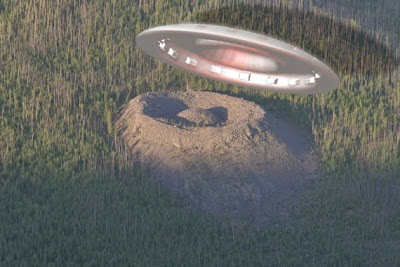 What is the Patomskiy crater? Is it some sort of volcano? The result of an underground explosion? Was it created by a meteor strike or a crash landing spacecraft? What lies buried beneath it; a rock or a UFO powered by some sort of nuclear reactor? More than 60 years after its discovery, we still don’t really know for sure. Perhaps in the future further expeditions will come to a better understanding of this strange enigma, but for now it lies out there in the cold Siberian wilderness, a mystery that eludes us and perhaps even pulses within the earth with some inscrutable intent of its own.